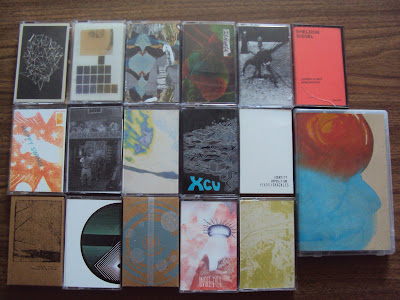 The tapes have been piling up here in the FFF bunker over the past few months, so it seemed like the right time to play catch-up with cassette culture and spotlight some of the great releases that we have received. Even with two hours to work with, it seems like we are only scratching the surface. There are plenty of other artists and labels we are excited to share new music from in the weeks ahead, but this week’s show represents some of our current favorites. While we get a reasonable number of promo items any given month, we still like to devote a bit of our ‘music budget’ to supporting and checking out new tape labels each month, too. To hell with audio samples, there is still something exciting for us about buying a release somewhat blindly and waiting to find out what sounds are contained therein, and many of these tape labels offer plenty of surprises and at a very reasonable cost. If you fall into a bit of a listening funk, which we all do from time-to-time, we encourage you to give this practice a try. The labels featured on this week’s show offer a great starting point.

For now, let’s talk about some of the highlights from this all cassette edition. Of the tapes we played, we have probably listened to Yousei Suzuki’s The Scene From A Frame and Guilio Aldinucci’s Archipelago more than any others, and both are artists that are completely new to us. Suzuki is a young guitarist/multi-instrumentalist from Osaka, Japan, whose guitar playing style is of a melancholic, detuned, Takoma-school variety. It’s unique and deeply moving, as are his piano pieces, where he attacks the ivories in a sort of free-improvisatory, Jandekian manner, stumbling upon simple, yet beautiful melodic lines. Aldinucci’s Archipelago, packaged in a similar wraparound Bradpak-style as Suzuki’s, this one with some very fetching silkscreen work, has to be one of the best sounding tapes we’ve heard in awhile. Aldinucci is an Italian electro-acoustic sound designer who works with synthesizers, field recordings, mellotrons, and other assorted gadgetry to create richly textured and subtly melodic compositions. While we didn’t play this particular track on the show, the sidelong “R n R Through Broken Headphones” is an absolute monster of slow building, euphoric clamor that displays a certain range and dynamics that sets Aldinucci’s work apart from many others in the electro-acoustic field.

In terms of new batch offerings from tape labels, we’ve been thoroughly enjoying digging into the latest ones from Goldtimers, Eiderdown, and House of Alchemy. Goldtimers, who were inactive for the better part of the last year, unleashed a massive batch of six tapes this past month. While we are still trying to give good focused listens to each and every title, the Innercity, Noir and Antic Hous, and Horsehair Everywhere tapes have been standouts thus far. Innercity, the solo project of Belgian artist Hans Den, caught our attention with his excellent tape that he put out on Sicsic awhile back; however, his A Minor Princess really pushes his warped electronic visions to epic proportions. In our humble opinion, Innercity is one of the real hidden gems within the tape underground. Not sure if two releases constitutes a batch per se, but, what the hell, Eiderdown’s latest offerings from Jon Collins and Ecstatic Cosmic Union are both top-notch. As with their previous tapes, these two feature amazing hand-drawn artwork with a consistent visual aesthetic across releases. Collins, who knows a thing-or-two about unique packaging as the proprietor of Winebox Press, is an insanely talented guitarist and improviser whose The Great Stink just might send us down another guitar-based album rabbit hole as did Willie Lane’s Guitar Army of One. We have also been enamored by the soothing psychedelia of Ecstatic Cosmic Union, a husband-wife duo that sounds equal parts Trouble Books, Sun Araw, and Neu. If it ever warms up around these parts, this will be the tape that we’ll be playing while we are driving around with the windows down. Finally, the latest tapes from House of Alchemy are ridiculously great as always, the monstrous c-84 of Sheldon Siegel’s Three Euro Breakfast being a particular favorite. We will hold off on gushing too much here about House of Alchemy for the time being because we are going to be doing a feature on the label, including a chat with label head and Chapels high priest Adam Richards, in the weeks ahead. Stay tuned!!
Posted by Free Form Freakout at 6:14 PM No comments:

Phoenix "The Real Thing" from Bankrupt!
Pigeons "Laisse Tomber Les Filler" from Liasons
My Morning Jacket "What A Wonderful Man" from Z
Adrian Lloyd "Lorna" from Lorna b/w Got A Little Woman 7"
Bob Mould "Star Machine" from Silver Age
Wooden Wand "Vengeance, Pt. 2" from Harem of the Sundrum & The Witness Figg
David Bowie "The Star (Are Out Tonight)" from The Next Day
The Dead Milkmen "Bitchin' Camero" from Big Lizard in my Backyard
Ulaan Khol "Track 2" from III
My Bloody Valentine "If I Am" from MBV
The Sleepers "Walk Away" from Painless Nights
Nick Drake "Hazy Jane II" from Bryter Layter
National Park System "Egg Song" from A Visitor's Guide
Pumice "Thermos in the Studio" from Quo

Many thanks to all of the folks that called in and pledged their support to KMSU during today's show and thanks again to Soft Abuse Records for offering up such an incredibly generous premium option. The station is still just a few thousand dollars away from meeting its goal of $35,000 and, based on previous experience, those can be the hardest dollars to come by. You can still help us out by pledging at any dollar amount you can swing. Give the station a call at 507-389-5678 or 1-800-456-7810. You can also pledge online at www.kmsu.org. Let us know if you did and we will certainly hook you up with something regardless of the amount.

Posted by Free Form Freakout at 9:18 AM No comments: 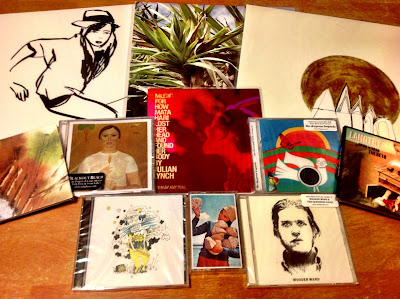 April 24th marks the start of KMSU's annual Spring Pledge Drive. This time around, a goal of $35,000 has been set: the largest in the station's history! After 50 years in existence as a community radio station, I assure you, we're not all of the sudden becoming greedy bastards. Like everything else around us, it's simply becoming more expensive to run a station like this, which already operates on the thinnest of shoestring budgets.

With the stakes being raised this time around, we here at Free Form Freakout wanted to do something a bit more grand to try and entice listeners to call in during our show and pledge their financial support to the station that we love and value so much within our community. Without so much as a "Look, here's the deal", the generous folks, and longtime supporters, at the Soft Abuse label went and offered up perhaps the most insane premium item that I believe we've ever done on our show. For the first four people that call in and pledge $50 or more during our regularly scheduled 2 p.m. show on Thursday, April 25th, you will become the proud owner of the Soft Abuse Records Starter Pack, a handpicked selection of eleven key titles from the Soft Abuse catalog that spans various genres and formats.  The Soft Abuse Records Starter Pack includes:

We also have stacks of CDs available from the now dormant, though equally amazing, Last Visible Dog label for those that pledge in the $10-50 range. In addition to these FFF exclusives, we'll be plugging the various KMSU premiums that include t-shirts, coffee mugs, CDs, and much more.

If you value the type of show that we do and the type of programming that KMSU offers, then we'd love to hear from you this week. Not only will your dollars go to a worthy cause, but you can score a stack of great music in the process. You can make your pledge by calling us this Thursday at 507-389-5678 or 1-800-456-7810. You can also pledge any time online over at the KMSU website. We look forward to hearing from you!!
Posted by Free Form Freakout at 8:28 PM No comments:

On today's show, we previewed some of the exclusive singles that will be available this Saturday for Record Store Day. Locally, Tune Town will be stocked with a healthy selection of these titles and much much more. Come early and stay late for free food, giveaways, Shuffle Function's K-Tel Radio Roulette, and live music throughout the day by Mankato's own Cult of Amanda and Goodnight, Gold dust. Get away from your screens and get out and support independent record stores and be a part of your community. Check the Record Store Day website for a complete list of the exclusive titles available and for participating stores in your area.

Posted by Free Form Freakout at 5:30 PM No comments: 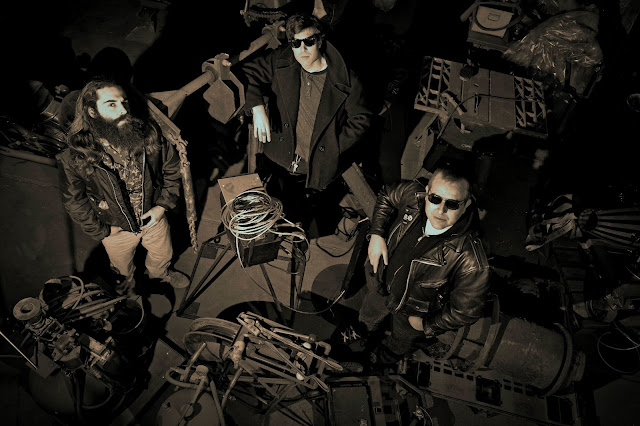 After a few year hiatus, the Michigan-based noise trailblazers, Wolf Eyes, have returned to reclaim their crown as the underground's supreme rulers of mangled 'audio horror' and all things INZANE. On this edition of the FFFoxy Podcast, we talk with core members John Olson and Nate Young about the making of their amazing new album No Answer : Lower Floors out now on De Stijl Records, about the addition of their newest member Jim Baljo, and about their upcoming tour dates in Europe and beyond. We also take a cruise through the Wolf Eyes catalog with selections from the latest album through the various collaborative and offshoot solo projects of the current line-up. That’s right, it is two hours of all things WOLF EYES.


For more information and to order the new album, check out the following links:
Wolf Eyes
De Stijl Records

Posted by Free Form Freakout at 6:56 AM No comments:

Joseph McNulty "I Ain't Tempted By No Devil (for Mother)" from Walk Crawlin'
Low "Just Make It Stop" from The Invisible Way
Azalia Snail "Space Heater" from Celestial Respect
STNNNG "Dubbed Warehousing" from Fake Fake
Freedom Fighters "Crows Nest" from My Scientist Friends
The Blind Shake "Man Leaves House" from Seriousness
Los Pecos "Cumbia para un viejito" from Cumbia Beat Volume 2
Lee Noble "Your Privilege" from Horrorism
Mudhoney "I'm Now" from The Lucky Ones
Devo "Uncontrollable Urge" from Q: Are We Not Men? A: We Are Devo!
ABC "The Look of Love, Pt. 1" from The Lexicon of Love
Air "Playground Love" from The Virgin Suicides O.S.T.
The Rolling Stones "Miss You" (extended version) from Rarities 1971-2003
Fidlar "Cheap Beer" from S/T
The Adverts "Gary Gilmore's Eyes" from Crossing the Red Sea with The Adverts

Posted by Free Form Freakout at 5:20 PM No comments: