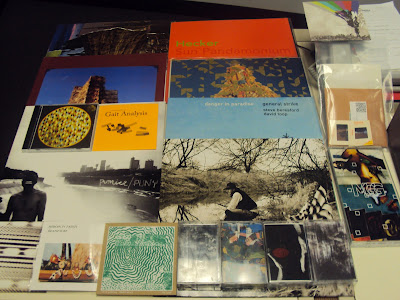 
As mentioned in a previous post, the regular, non-feature editions of the Free Form Freakout podcast show are going to be expanded to roughly two hours in length, which, as you can see, is something we’ve already rolled out for this week’s show. Again, we are doing this as a way to cover more of the incredible music we are buying and receiving on a monthly basis. We hope that these super-sized shows will provide you with more new underground and experimental music sustenance, not just innocuous soda-and-fries musical filler. We are still scraping together our coins to officially beef up our Soundcloud status, but we want to extend a huge thank you to those people that have already donated their hard-earned dollars to help us out with this upgrade. The support and generosity we’ve received from, in most cases, complete strangers has been unbelievably moving and it has certainly provided us with a renewed sense of purpose for producing these podcast shows. Thank you!!

Let’s move on to some of the highlights from this week’s show and, man, are there plenty worth mentioning. First, I’ve been a little surprised almost by how much I’ve been listening to this new Trouble Books album, Concatenating Fields. This Ohio-based, husband-and-wife duo struck just a perfect balance between neo-Kosmische synth ambience and minimal guitar pop on this release, sounding to these ears like a late-night studio pairing of Brian Eno and Low. The closing track, which features fellow Ohioans Tusco Terror, provides a nice dreamy and somewhat clamorous way to round things out. As a longtime fan, I was incredibly psyched to be able to play something from the new Pumice (a.k.a. Stefan Neville) album, his first full-length in over four years, on this week’s show. On Puny, Neville finds new wrinkles and odd time signatures to deliver his battered pop tunes and chord organ drones with. “Covered In Spiders” is perhaps one of the most straight forward, yet wholly affecting tunes Neville has ever penned, but in many respects it boils the ‘Pumice sound’ down to its brilliant core. Since first getting hipped to Troy Schafer’s work through his excellent solo release on Recital, I’ve been slowly investigating some of his other projects, among them Rain Drinkers. This duo’s latest album Yesodic Helices has such a timeless heft to it, sounding both soothingly familiar, yet utterly profound. It’s just an album that needs to be heard, no words can really do it justice. Finally, in terms of the outer realms of electronic music composition, I can’t say enough good things about the latest offerings from Head Boggle and M. Geddes Gengras. My introduction to Derek Gedalecia’s Head Boggle project was his tape that came out on NNA last year, which was a wildly disorienting aural treat. With Headboggle, his vinyl debut, the sounds are in places a bit more restrained, though there is an attention to detail paid to each and every sound that dips in-and-out of these tracks, giving this release more of a classic musique concrete feel than that of your average noise or synth-twiddler. While many people are going Congo crazy in regards to Gengras of late, justifiably so, for my money his Systems 1 triple cassette release on 905 Tapes scratches that Paypal trigger finger itch far more convincingly. But then again, Gengras, as a solo artist, can do no wrong in my book, so take it as you will.

On the next podcast show, Nathan McLaughlin and Joe Houpert will be joining us in the studio and doing a rare performance together as Loud & Sad. Check back in with us in a couple of weeks.
Posted by Free Form Freakout at 11:31 AM