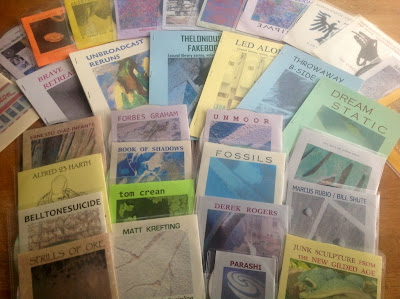 On this edition of the FFFoxy Podcast, we focused on the work of the San Antonio-based micro-press, Kendra Steiner Editions, run by writer and poet, Bill Shute. Starting in 2006, Kendra Steiner Editions began publishing small runs of hand-assembled chapbooks by contemporary poets. A few years later they also started issuing forth a wide range of forward-thinking experimental music on cd-rs, with releases by several artists we have featured on our show over the years, including Rambutan, Parashi, Derek Rogers, Ernesto Diaz-Infante and others. We spoke with Bill about both the music and poetry sides of Kendra Steiner Editions, discussing his own work and motivations as a poet and publisher. We also played several tracks from new and forthcoming releases and heard some of Bill's own works, including a preview of his latest poem, Worried Men and Wooden Soldiers. Please visit the Kendra Steiner Editions website for more information and to order their currently available titles.