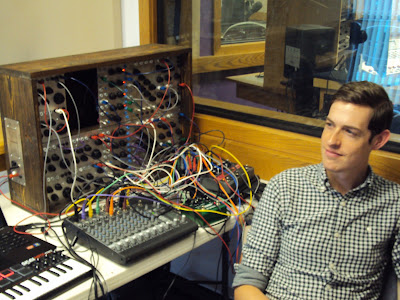 On this week's show, we were joined in the studio by Justin Meyers. Based out of Minneapolis, Meyers has been releasing his carefully crafted noise and minimal electronics pieces for almost a decade now under his given name and such monikers as Devillock, Panther Skull, and Glass Organ. His releases have appeared on such notable labels as Arbor, Chondritic Sound, Troniks, Students of Decay, and his very own Tone Filth imprint. Recent years have seen Meyers   begin to investigate modular synthesis, while bringing to it his knack for thoughtful composition. We were fortunate to have Justin perform a new piece for us on his latest modular synthesizer that he recently finished building. We also got to chat with him a bit to find out more about his music and his Tone Filth label.

For more information, check out the following links:

Just wanted to show some appreciation. Really enjoyed this show. I've been a long time fan of Tone Filth so this was really cool to see.

Awesome! Thanks for listening!!